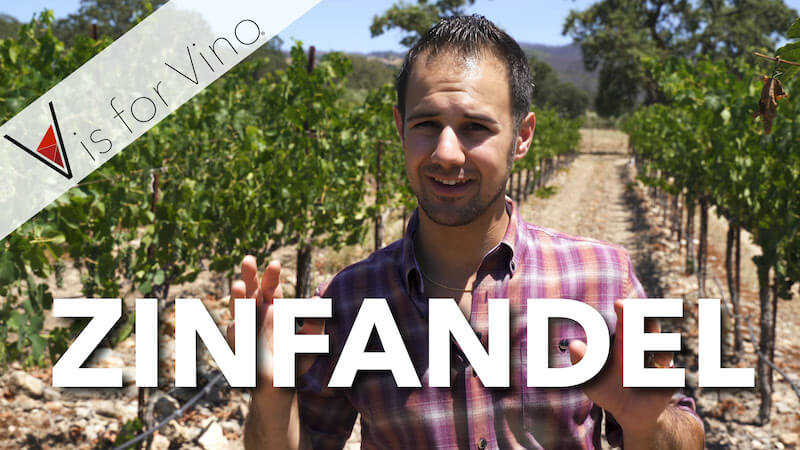 While there were a whole lot of options for our featured Sonoma County episode grape, I landed on Zinfandel. Zinfandel gave California it’s claim to wine fame, and was the most popular grape planted in California until Cabernet took over in the 90s. Zinfandel is easy to love; it’s fruity, spicy, bold and assertive, and easy to drink! It also is the same grape as the infamous White Zinfandel, and although it’s definitely not my favorite wine, we’ll break down why White Zinfandel may have actually saved red Zinfandel! Watch the video below to get a primer, and then read the blog to get more info!

Zinfandel was the most planted red grape in all of California for the bulk of Californian’s winemaking days, until Cabernet Sauvignon got popular and took over in the 1990s. Part of the reason for it’s popularity is because it produces such love-able flavors. Super ripe berries are at the forefront; strawberry, blackberry, raspberry, and bramble. However, Zinfandel usually has a really nice spice component to it that can include, pepper, clove, and all-spice. Our favorite types of Zinfandel have a nice balance between fruit and spice!

More often than not, Zinfandel is made in a fairly warm climate, with ripe fruit character and a fuller body. This means a fairly high alcohol content: 15%+. It’s tannin structure is usually moderate, but its the acidity that really can make or break the wine. Sometimes, if the acidity on Zinfandel is too low, the wines taste syrupy or “jammy”. Most people agree that it’s usually better to have a wine thats a got a bit of acidity, to help keep the wine fresh, to balance all those super ripe fruits! And every once in a while, you’ll find a leaner style of Zinfandel made in cooler climates, that clocks in around 13% alcohol, has a lighter body, and more red fruits. These styles are a bit more rare, but fun if you can find them!

What is White Zinfandel?

First things first: white Zinfandel is not a different grape than red Zinfandel. It is the same grape that’s used in red Zinfandel, but made in a semi sweet rosé style. This means the juice is only allowed to sit on the on the skins for a small amount of time, which gives it that “pink” color. But the story of how white Zinfandel came to be, that’s a bit interesting…

Most rosé wine is dry, and allowed to fully ferment; this means the yeast eats ALL of the sugar from the grape juice until there is none left, and no sweetness, called “RS” (residual sugar) leftover. But back in 1975, Bob Trinchero of Sutter Home Winery changed the game.

He was making a good old fashioned batch of red Zinfandel using a method called “saignée”. This means that you take out a bit of the juice of the red wine out from the tank, to leave the remaining red wine with more skin-to-juice ratio. His intention was to bottle and sell the run-off juice as a DRY rosé; one with no sugar. However, the rosé had a “stuck fermentation” which means the yeast stopped eating sugar before it was all gone. He was left with a semi-sweet pink wine. He decided to sell it anyway; to his surprise it sold like wildfire!

White Zin had a huge effect on the wine market. Even today, 85% of Zinfandel grapes grown in California are used to make it. And culturally, most people now think that all rosé is sweet (which is definitely not true!)

In wine circles, White Zin is the butt to a lot of jokes. It’s a cheap, sweet, uninspired wine that’s more common at college parties and crazy Aunt Sue’s home than on a restaurant menu. However, White Zin did some really good things for the American market….

First off, White Zin introduces a lot of Americans into wine in the first place. Most Americans are used to drinks that have sugar in them, like soda. White Zin provides them a wine option that transitions them into dry style wines down the road.

What is “Old Vine” Zinfandel?

Old vines are said to be more stable, and produce better wine. Because the produce less fruit, the fruit they do produce is more concentrated. Zinfandel in particular is a grape that advertises it’s “old vine” status quite frequently. Typically, vines that are at least 50+ years old qualify. However, there is no set definition or regulating body for “old vine”, which means anyone can put it on the label regardless of vine age. So your best bet is to check out the winemakers website; if the vines really are “old” they’ll most likely be bragging about the exact age of the vines!

If you’d like to buy some amazing Zinfandel, Beltane Ranch from our Sonoma County episode makes some great Zin, that can be found HERE!

The wine we featured in our Sonoma County episode is an amazingly fresh style of Zin, all from a single “vineyard block”; no blending. “The 2017 Estate Zinfandel Heins Block has a medium to deep ruby-purple color and scents of peach cobbler, pie crust, brown sugar and mixed berry jam plus graphite and soil notions. Medium to full-bodied with loads of ripe berry fruits, it has grainy tannins and juicy acidity, finishing long and layered. 456 cases produced.” – Erin Brooks, Robert Parker Wine Advocate

Turley are Zinfandel Kings in California. They produce a lot of single vineyard Zins from all over the state, including Paso Robles and Sonoma. This wine is a blend of about 18 of their old vine vineyards all over the states, and is a tremendous bang for your buck!

92 pts Robert Parker: “Medium to deep ruby-purple in color, the 2017 Zinfandel Old Vines features exotic spice accents over a core of blueberry and boysenberry compote, crushed black cherries and berries with notes of cinnamon stick and potpourri. Medium to full-bodied, it has loads of spicy black and blue fruits in the mouth with firm, ripe tannins to frame and juicy acidity, finishing long and very spicy. 12,000 cases produced.”

Can you say anything more about such an old school, iconic producer like Ridge? They’re OG Zin producers, and Lytton Springs is one of their first vineyard sites; it’s been producing for them since 1972! Located in Dry Creek Valley (in Sonoma County), which is one of the best places for Zin on the planet, this is truly a special wine from a tremendous producer!